I've been busy this past week and a half with what has seemed like the warp from hell.  I was just beginning to thread it in the last blog.  Well, because the warp had been wound so long ago, and had been hauled around, pulled out, put back in boxes for so many years, it was a mess.  Some sections had lost the cross, some had slipped out of the choke ties... it was just ugly.  But I persevered, and got it on the loom in five days, with only two broken threads.  I made more mistakes threading than I care to relate, but got all of those fixed.  I started weaving--so excited!--and then, the brake wouldn't hold.  I took many pictures of the brake and sent it out into the universe asking if anyone knew where I could get parts for a 1978 Tools of the Trade.  All the Google searches came up with other people moaning about the lack of brake parts.  Uh-oh.  I had an offer from Pam Howard, Master Weaver Extraordinaire, to ask her blacksmithing husband to make a new one.  But a friend at work said he'd like to try.  He's ordered a piece of aluminum and is going to try to cut it with some new-age kind of cutter he has.  I hope it works, but I'm keeping Ron the Blacksmith in mind in case it doesn't. 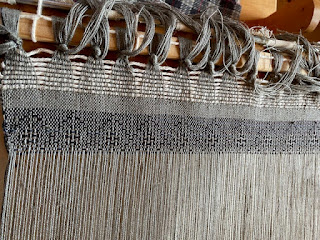 The saddest part is the warp that has to wait for the new part.  I'm glad the weft I chose works pretty well with it, and I've got beads picked out for making the hemstitching fancy, as I like to do, but I'm going to wait for that until I know the brake will work.  I avoid looking at it, because I was SO excited about weaving the Huck Lace design, but it will need to wait.Meanwhile, I've been knitting to avoid the studio.  I'm making a blanket from all the natural and nearly-natural bulky yarns my mom liked to collect.  It's great tv-watching knitting, and just a nice break from anything complicated, plus less yarn for my heirs to get rid of when I'm gone.  Does anyone else worry about that, what the heirs will do with all the yarn you just HAD to have and then did nothing with?  It's a good thing I can't afford to buy new yarn right now, since I have my mom's stash and mine to plow through first!

I have been weaving occasionally on the Ancient Rose scarf.  I have to admit that I find it kind of boring!  It's beautiful, but the pattern is short, and I have it memorized, so I'll weave a few repeats and wander off, looking for something more challenging. 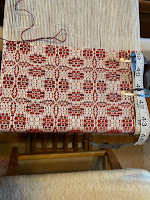 It's warming up here, and I am making plans for the yard for this year.  I want to build some raised beds near the back deck so the garden is closer to the kitchen, and to the garden hose, and I'd like to plant a couple of fruit trees.  If Congress doesn't pass the stimulus bill, none of that will happen, though.  I won't get started on that. 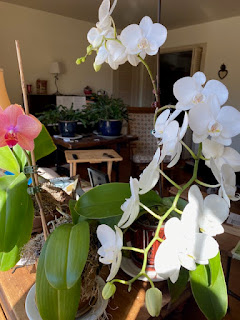 But in the meantime, the orchids are going crazy!  I've never seen such a thing!  I've never grown orchids before, and have either inherited these from Mom or been given them.  This white guy has 11 on one branch and 9 on the upper branch!  And the Christmas cacti are trying to be Easter cacti again, which is fun.

Stay tuned to see if Dalton can duplicate my brake piece so I can get back to weaving on Tootsie!  Have a good week!

Popular posts from this blog 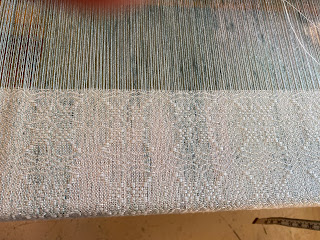 What a relief it was to read the newspaper this morning without worrying about what crazy new thing had been said/done overnight!  The poem of Wednesday sings through my head, colored by that brave woman's sunny coat, and the Bernie meme keeps making me laugh out loud.  So, having today off, I tidied the house and went to the studio, full of hope and looking forward to the future.     The hand-dyed warp on Tootsie is on the second scarf, the first having gone to Nashville.  I didn't take any final pictures, sadly, because I didn't want them posted before the gift was received.  Trust me when I say the drape was absolutely wonderful!  The colors were a bit...meh!  But neutral in a minty kind of way.    I didn't like the way the pattern looked so washed out with the 6-shaft overshot from Strickler, so I changed it after cutting the first one off, to Waldenweave from Bertha Gray Hayes, a pattern that I've been dying to try since my false start on the turned overshot
Read more 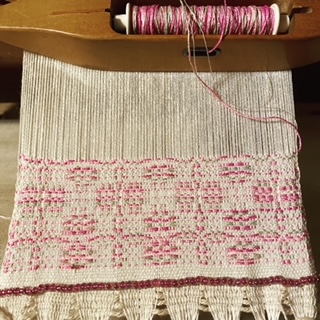 It's a gloomy Friday morning so far, but it's supposed to be sunny and 55 later.  In mid-winter, I'll take 55 and sunny!  Wiley and I will go for a ride and a walk later, but this morning, I've been weaving.   This past week, I finished the white and green towel warp.  I've really enjoyed the "walking" treadling:  1-4, 4, 3-4, 3, 2-3, 2, 1-2, 1.  But after 8 towels, I was ready for something new.  I've had a box of hand-dyed pink and green bobbins following me around for at least the last ten years, and I love Ancient Rose from the Davison book, so I wound an 8-inch warp of white bamboo, and teamed the bobbins with some 20/2 tencel for the tabby weft.  Of course I beaded the hem-stitching, but I tried once again to bead both sides.  It went a little askew, and I'll have to fix it when the scarf is done.  I'm not sure I'll do that again, or work to perfect the technique.  It would sure be easier to bead one side then go back and bead the o
Read more